0
0 In Beauty and wellness

I made notes of that first week eating only 600 calories a day, the diary 3 is to tell how my body and my mind are reacting to this sudden change in food.

In the previous post I mentioned that my head was confused and so I stayed the whole week. As if I had changed my operating system from Linux to Windows. The compromised data processing processes slow and error, all locking.

My head was injured but, other than that the worst was feeling hungry. If I could I would eat a little bit every 1:30, but may not have to wait 3 hours to eat a tiquinhozinho of nothing new.

As I started the diet on Saturday (11/12/2016), we had the holiday wedding anniversary lunch chosen by nutri and I stayed 4 days at home. 4 days looking at my cereal bars with chocolate, my cans of condensed milk and eating tasteless food.

Even seasoning with everything he can: garlic, onion, pepper, nothing made the food look hot. I don’t eat ) salad so the worst part was used to the taste buds with green leaves, the only thing free amount in the diet.

When I got back to work and the routine I felt less hungry throughout the day, but the pot of chicken was still difficult to eat. Chicken is the protein easier to do after the egg. Egg that I can only eat the egg that also has no taste.

Who says it’s easy to maintain a diet of 600 calories a day, that’s crazy. Maybe get easier over time, but the early days were almost torture. I had dizziness, nausea, vomited and I thought I was overloading my body for nothing (like the other times I’ve tartei with disrupters).

I had the urge to eat this week? Everything, sweet, salty, rice, beans, meat, cake. All I felt the smell my stomach jumped desiring. But surprisingly I didn’t feel like milk or soda, point for me.

I left the diet only in the day of my wedding anniversary, ate some candy for dessert, very little. But, huh? Shouldn’t.

In return with the Nutritionist, she explained that the reduction of carbohydrates cause the symptoms of dizziness, slow, nausea. As it was nothing exaggerated, was not reason for changing the diet.

The doctor’s expectation was that I would eliminate 2kgs in a week, but I lost just 1 kg. It could have been that little bit of dessert I ate? Can! But it could also be my metabolism is well slowed, according to the bioimpedance.

Until my return was pretty emotional, motivated, but the possibility of my body take to respond to diet, health does not improve as fast as promised, made me really so angry with life.

I’m not even going to talk about the fact the Nutri asking if I was pregnant because of my symptoms are all morning. The annoying thing to have to answer that kind of question.

I left the Office sad and discouraged, think about the other doctors I went through and I still have some tests to do. Maybe these tests help to understand why I don’t lose weight and my metabolism so slow.

But, in this first week with the diet of 600 calories what most annoyed me was the question: are you on a diet? With that look of contempt or curiosity, as if it were something funny or ridiculous.

When someone sees my marmitinhas comes the question and mentally I answer like this: 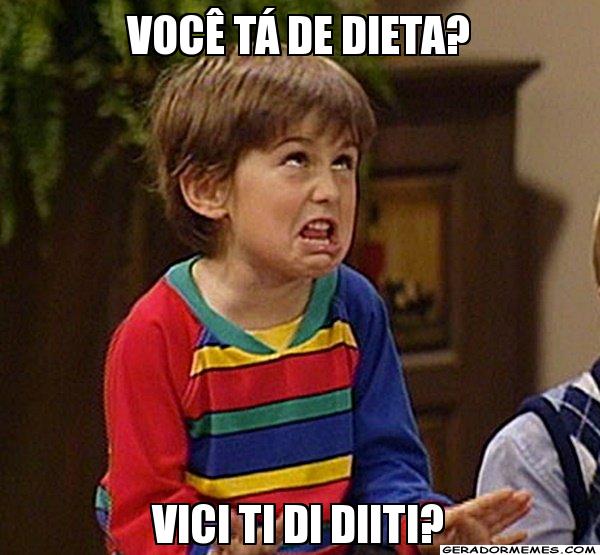 You can see that my mood zero tolerance didn’t abandon me, huh? Good, now I’m living better the second week with more strength and resilience.